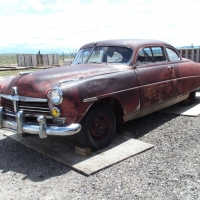 blondwookie Posts: 239Member
October 2020 in The Flathead Forum
I have been told by Cole at Wildrick, that I have a crate 308, stamp number F14837.
I've been looking at 7X camshafts on the form from 2015and 2015 as well at 21st Century Hudson.
Today, I looked at my camshaft, for measurements and cast number.My cam number is309742. Lobe height is 1.557 lobe diameter is 1.199 by digital calipers. I again looked online and the form from 2014 and 2015. By my cam number, I have a factory 7X camshaft with hydraulic lifters. I checked the oil pump drive gear, it appears to be a steel gear. When i rebuild my engine, I plan to install a bronze gear and a true double roller timing chain.
My head that I have for this engine is a 308. Larry at Clifford Performance told me how to check for thickness on my head. My head is just shy of 2 inches thick. Larry told my that my head is completely stock thickness. He suggested that I shave my head .060 for better compression
I've built engines as a professional mechanic for 23 years before I retired from the trade 15 years ago. Everything that I've seen of this engine, says that it was a low mileage engine before it was parked. I purchased this engine from Ron Falk. I tore the engine down, including removing the crank, to forcefully remove the rust frozen engines. This destroyed the pistons but no damage to the rods. There are no cracks anywhere on the block, including between the valve seats.
My question is simple, should I use the 2 inch intake valves and 1.687 exhaust valves? If I use these larger valves, will I also need to enlarge the  air intake chambers for better air flow? I know the valve seats will need to be enlarged for the larger valves. At this time my engine has 1.847 intake valves and 1.570 exhaust valves. Years of rust have eaten these valve stems up badly. This includes the valve guides.
Any and all input will be helpful will be greatly appreciated, being that this is my first Flathead engine to work on.
Thanks Wookie