Fellow 39 Owners or Anyone who may know 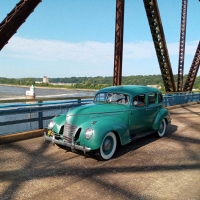 Val Posts: 1,109Member
November 2022 in HUDSON
I was reading the History of Hudson by Don Butler and in the 1939 section where it talks of the Hudson Six Touring Sedan it reads " painted auxiliary grilles beside the Chrome central grille" So am I to understand that the side grilles were painted? Would that have been the body color?   Do any of you have a picture of this?