Hudson overdrive - why is the governor set at 22 MPH? 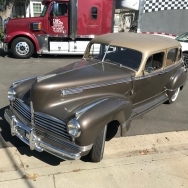 After all the usual hurdles and setbacks I now have the overdrive transmission installed in my 42 Commodore 8.

Now I just have to get used to operating it.

All the other B-W OD units I have experienced over the years, have the governor calibrated to cut in at 28 MPH.  (Ford, GM, AMC) Hudson has theirs's calibrated to 22 MPH(!)  this as noted in the owners' and shop manuals.

I have never seen an OD unit set to engage so quickly. Having it set so low essentially makes 2nd gear direct not usable.

First direct, then shift to second and as soon as you are in second you are going to be above 22MPH. Back off the gas at all (like traffic slowing) and it drops into OD. (too high a ratio for 22-27MPH) Shift to third and it is of course in third OD.  Yes you can kick it down into direct but then you have opened the throttle to do so, and this is not economical driving.

When the OD is set to 28 MPH when you shift from first to second you can either drive in the 20-25MPH range (a good second gear speed) or accelerate to (a too little fast for second gear) 28 MPH and then let it engage and drive comfortably in second OD (a good faster traffic speed)  If you are in second direct at 20-27 MPH and you shift to third you are in third direct and can either hold it in third direct (traffic speed) or back off the gas and drop into third OD for the highway.

Does anybody know why Hudson might have set the OD governor cut in speed so low? I am considering trying to recalibrate it for a higher cut in speed.