Window Winder Woes Resolved - And This Is How I Did It 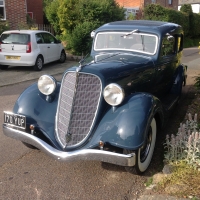 Old Fogey UK Posts: 933Expert Adviser
July 28 in HUDSON
My earlier post described a droop that had developed at the front top edge of my driver's door window.
I put on my Sherlock Holmes hat and this is what I discovered about the winder mechanism used in 1934 and possibly other years.
The glass and its retaining channel aren't attached to the winder mechanism; there are 2 screws wound into the lifter bar which pass through 2 slightly larger holes in the glass retaining channel with nothing on the other side to hold the bar and channel together - the channel just rests on those 2 screws (weird, no ?!).
The play in my worn winder mechanism roughly corresponded to the distance between the hole in the channel and the bottom edge of the channel.
That gave me an idea.
I took the screw out of the lifter bar and substituted a bolt of sufficient length to rest the bottom of the retaining channel on.
I put a large repair washer - in England we call them "penny washers" (our pennies were bigger than the American ones !) - on the shank of the bolt on the other side of the channel and clamped it tight against the channel with a lock nut, securely holding the lifter bar and the channel together - and it worked - no more droopy glass !
I'm posting this because no-one responded to my first post with ideas on how to fix my problem and so I wanted to share my repair method in case anyone else develops the same problem.