More on the Hudson Ships and Castles Logo 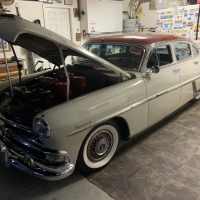 54Hudsonman Posts: 4Member
December 2021 in HUDSON
I wondered what the ships and castles represented on my Hudson were all about and there is little information on the web to document those symbols. Here is what I did find on two sources:
1.
Hudson Logo and symbol, meaning, history, brand
https://1000logos.net/hudson-logo/
"Hudson is the name of a former American auto-making company, which was established in 1909. Despite its pretty short life as a separate brand (all operations were ceased in 1954), Hudson left a strong and significant trace in the world auto-making industry, being one of the companies to form The American Motors Corporation.
Meaning and history
Hudson brand has had just one logo designed for it throughout the years, and it was just slightly cleaned and refined once, with the switch of some elements’ colors. Though the basic structure and symbols on the Hudson crest stayed almost untouched.
The Hudson logo was composed of a smooth red trapezoid crest with rounded angles and top and bottom lines arched from the center. The original version featured yellow and white drawings on a dark red background, with no framing of the crest.
In the middle of the emblem, there were two white triangles, framed and separated by thick yellow lines. The triangles were pointing down and merged in one figure. The images were placed on both sides of the central element and mirrored each other: one tower on the left, and one on the right, two yellow ships — one under each tower. The “Hudson” inscription in the uppercase was also split into two parts — “HUD” on the left from the triangle, and “SON” on its right.
After the redesign, the red background of the crest became lighter and the emblem gained a medium-thick dark green outline. As for the yellow elements, they were replaced by the light-gray ones, being redrawn more confidently and boldly. The “Hudson” inscription was also rewritten and gained a thin dark outline to its capital sans-serif letters.
The inscription on the Hudson emblem was written in the uppercase of a traditional and simple sans-serif typeface with bold neat contours. The font of the lettering was pretty similar to Grovana Bold and Cannon SC Medium — minimalist and classy typeface with straight lines and full shapes.
The red, gray, and moss-green color palette of the Hudson logo looked royal and Noble, representing power, courage, and determination, with the accents on stability and serious fundamental approach to the car manufacturing process.
When used for the first years, the badge featured a red and yellow palette, which was more dramatic and bright, a combination, which was very good for introducing the brand to the market, reflecting its targets, intentions, and aspirations. With the white triangles standing for reliability and transparency."
2. 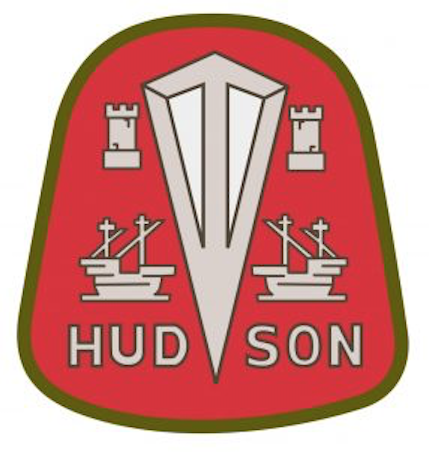 Found in the Hudson Essex Terraplane Club "Open Forum"
The history on the Ship and Castle — Hudson Essex Terraplane 'Open Forum'
https://forum.hetclub.org/discussion/comment/229528#Comment_229528
In June 2019 railknight said:
---This might be of some help from the book, Hudson, The Postwar Years, by Richard M. Langworth.  On page 6, 3rd paragraph, it reads:  "The triangular Hudson logo, adopted in 1909, was later decorated with the coat of arms of Henry Hudson the explorer: ships, to "symbolize the adventuresome and pioneering spirit of bold and imaginative engineers," and fortresses (the Castle Towers), to represent "...the strength of the organization throughout the world.  Placed on the Hudson shield, this 'coat of arms' is a mark of distinction on cars of quality."