6 Volt radiator fans no longer being made 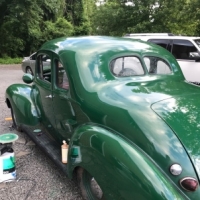 I spoke to the owner of Maradyne last week. I had inquired to see if they would work with a positive ground system. I left a message and the owner called me back. He is a great guy! From what he said, they are the only manufacturer of 6 volt radiator fans (at least in the US). He told me that he is going to discontinue the manufacture of the 6 volt fans because there is not enough of a market for them. Apparently, only about 100 of them are sold per year. I just wanted to let everybody know so they could get one if they would like to before they are gone.