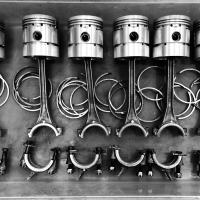 BigSky Posts: 995Senior Contributor
April 2019 in HUDSON
As some of you may know I’m going to be doing some internal work on my 1937 Hudson engine, new rings on the original pistons with cylinder hone and a valve job as well.  Along with this I’m replacing the original head with a higher 7.25 compression head vs the original 6.25 head.  The head is in very good condition but will still need a milling to true it up.

Since I’m needing to do some milling, I was wondering how high of compression I can go to on the 212ci splasher engine?  If anyone has done this type of thing I’d love to also know your experiences.